Out of trauma comes innovation.

Civil unrest plagued 57 city blocks of urban Los Angeles from April 29 – May 2, 1992. The fires left an ember amid the ashes, however. That spark ignited a widespread desire among professionals and volunteers alike to help the traumatized children find healing and grow into solution-givers for their community.

People from all walks of life reached across the divide to teach the children to trust once again. Meeting in space donated by the Los Angeles Baha’i Center, service groups representing various ages, causes and ethnicities each offered to spend one afternoon each week with the students. It soon became clear that their shared hobbies, homework help or even brief lessons on character education did not go far enough to unleash the potential of these young change agents. 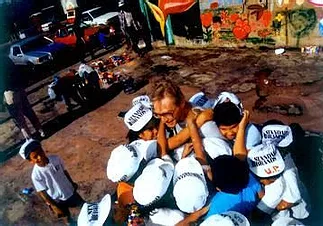 An integrated educational model called Full-Circle Learning evolved to unite the head, heart and hands in the act of change. Educators took note as the learners infused character, curiosity, creativity and cognitive skills into each unit. Students addressed specific community challenges as they gained a new sense of purpose. The teachers received training in strategies that exalted service to others over aggression and fight-or-flight approaches to problem solving. Even the conflict resolution techniques deepened to include guided imagery, global awareness and self-reflection, moving beyond basic negotiation and empathy building.​

Suddenly, altruistic identities emerged. The learners thrived.  What began as a grassroots project known as the Children’s Enrichment Program then formally took on the name of the educational model that has inspired the vision of teachers and young change agents from preschool through college on nearly every continent as they address local challenges through universal habits-of-heart such as respect, kindness, integrity, advocacy, and far-sightedness. A few historic highlights follow: